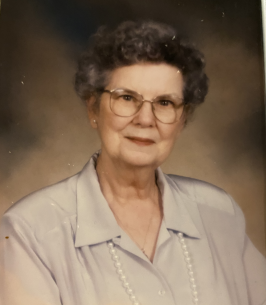 Mrs. Doris Walter, previously of Clarkson, daughter of the late Mr. and Mrs. Andrew Walker of Owen Sound, Ontario. Passed away peacefully at Valleyview Residence just shy of her 98th birthday. Doris remained true to her character right up until she died demonstrating grace, appreciation and a positive attitude. Predeceased by husband William Walter in 1980. Former employee of the City of Mississauga Engineering Department for twenty-three years. Retired in 1989. Volunteer in the office of the Canadian Cancer Society, Mississauga, for several years after retirement.